≈ Dings in Your Dodge?

Both socially and in business contacts, you may be judged by the car you drive. Create a good impression wherever you go with a car in tip-top condition  . . .  one that looks its best. By maintaining and protecting the beauty of your car, you make it more salable, keep its trade-in value high  . . .

Below, one side of a colorful fold-out mailer from your friendly Dodge dealer, in this case the Bar Harbor Motor Company at 34 High Street in Ellsworth, Maine. Phone number: 100. 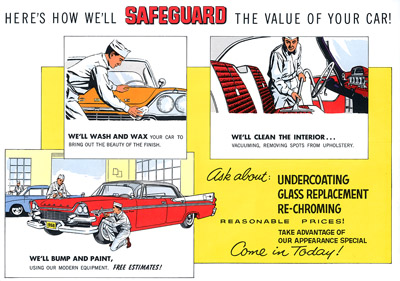 You are looking at 1965. New and exciting from PHILCO — TV today from the world of tomorrow. In one bold stroke of scientific research, Philco has brought exciting new freedom and flexibility to television design! Their ingenuity has created a new S-F (Semi-Flat) picture tube which measures less from front to back than any other. They have perfected a new Predicta chassis that puts more power in less space. And, for the first time in television history, they have freed the tube from the chassis. The new ’59 Philco sets are at your dealer’s now. See them! See how they give you a more brilliant, true, picture-window view of TV-land. See TV right out of the world of tomorrow!

The oddball Philco Predicta, a radical television with a "floating" picture tube (in some models an umbilical cable allowed placement of the screen up to 25 feet away from the chassis), was a sales flop at the time but is avidly sought by collectors now. Below, Model 4242-M in Blond, priced at $269.95. 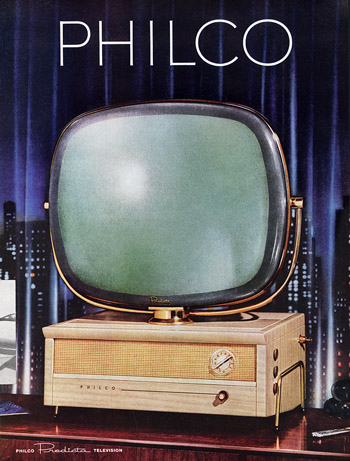 Like mother, like daughter — when both keep trim with Grape-Nuts. It’s the most highly concentrated protein cereal — 30% more protein per spoonful. And what a flavor — so different, so nut-like. You’ll like it. 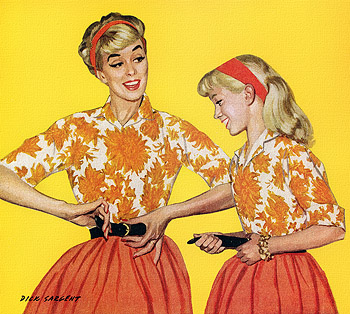 ≈ Where the Action Is!

If you like to travel on the sunny side, give the sporty new Dynamic 88 Convertible a once-around. Try those foam-cushioned all-Morrocceen seats for solid comfort. Lower the top (a flick of a lever does it), turn the ignition key and head for where the fun is. You never had it so good — Oldsmobile’s 280-h.p. Rocket V-8 and full-coil suspension will see to that!

We’re putting the top down and heading south, with posts resuming next week. Not long after that you’ll begin seeing some changes to Plan59 as we bring the site into the Web 2.0 age. We thought we’d start by replacing the vacuum tubes in the servers. 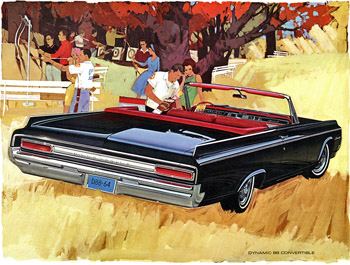 ≈ Where the Action Is!

Everything about these glamorous ’64 Oldsmobiles says “action” with a capital “A.” There’s a “let’s go” air of expectancy in the spacious, fashionably styled interiors. Slip behind the wheel, and you instantly sense Oldsmobile’s eager flair for going places and doing things. So nimbly responsive to your every whim  . . .  so sure and easy-handling  . . .  it almost seems to be as anxious to be on the move as you are. Now with 21 models to choose from — including a brand new Jetstar I Sports Coupe and new, never-before Jetstar 88 Series — Oldsmobile has more than ever of what it takes to put you right where the action is. And what a wonderful time you’ll have!

As channeled by General Motors, the chiseled edges and rectangular planes of Elwood Engel's elegantly angular Lincoln Continental and later designs for Chrysler emerged as the two-ton shoebox that was the 1964 Oldsmobile 98. Better things were ahead for Olds, but they’d come in smaller packages. 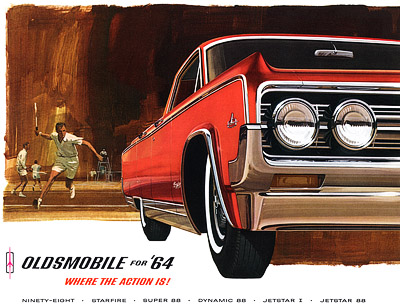 You must know that a fine motorcar means different things to different people. To some, it means merely the outward symbol of worldly success. To others, it means a host of inner satisfactions that spring from possession of the worthiest car the world affords. And to such as these, ROADMASTER is coming into ever-growing preference. The reason is obvious. ROADMASTER, you see, is unique among fine cars. It is the finest of Buicks. The gives ROADMASTER an advantage which other fine cars simply cannot approach. For this master car begins with all the advances that have swept Buick automobiles to soaring success — then moves on to a magnificence all its own  . . .

The magisterial application of big-caps/small-caps and italics by Buick copywriters at the Kudner agency, combined with expert artwork of Art Fitzpatrick and Van Kaufman, made the 1956 Buick Roadmaster (oops, ROADMASTER) seem practically beyond the reach of mere mortals. For dentists and insurance salesmen, though, it was another story. 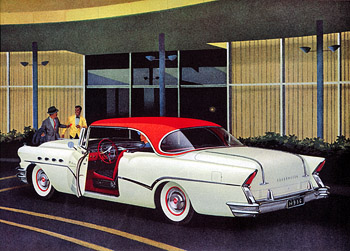 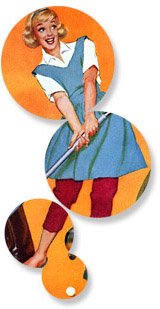 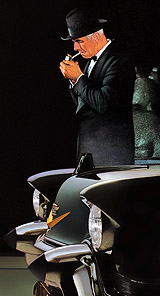